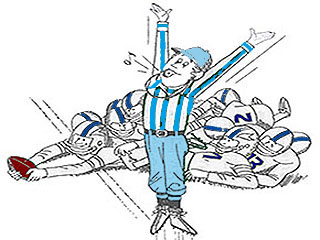 From the time he was eight years old, Frank Boyles had the ambition of becoming a pro football player.
He studied the game and played hard at it. Finally, in his senior year at college, a very attractive offer came. A representative from one of America's big pro teams offered him a contract. It stipulated a far higher salary than he had ever dared to hope for.

Boyles was inclined to sign the contract as soon as he saw it. But something told him to wait.
He asked for a couple of days to think it over. Then, a local school asked him to coach their team. It was a poor paying job compared to the offer from the pro team.
For him, the position of coach would be more than a job.
It would be a vocation.
It offered an opportunity to guide and influence the lives of other young men.

Boyles knew that he would never find satisfaction in life merely getting
a large salary.
He wanted to have a purpose in his work.
Accordingly, he accepted the lower paying position as coach.

Later he became the head coach of the University of Arkansas. He spoke in glowing terms of the feeling of fulfillment which he experienced through the years in helping to train young students. His "vocation" brought him happiness which a high salary could never buy.

"I feel sorry for young people who pick a job simply for monetary rewards," said Boyles.
"It will always be only a job, never a vocation. It depends upon whether he emphasizes salary, or satisfaction in his work."