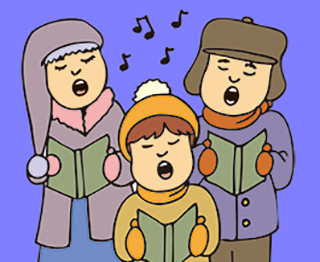 Creative power is something quite distinct from education. Education helps to develop it, but creative power itself is a gift which is received directly from God.

This mysterious power to originate ideas and produce original works of art is found in men and women of all ages, from the young to the very old. Mozart was producing classical music at the age of four, and Michelangelo was still carving statues of exquisite beauty at the age of 89. The creative power of these two men, and of many other genuises of history, was not learned from books. It was rather a power which resided in the depths of their hearts, a power which they developed and exercised with great zeal.

Only the most outstanding artists are referred to as "geniuses." Creative power, however is not limited to those persons whose works become famous. In veering degrees. we also possess it. Many of us do not realize how much power or talents we really have.

Franz Gruber did not know that he had the ability to compose music until two days before Christmas in 1818. Gruber was the organist at the village church, and the organ had broken down. In order to provide music for Mass on Christmas, he composed a hymn to be sung to the accompaniment of a guitar. It was called "Silent Night" which became the most famous Christmas carol ever written.

Like Franz Gruber, we all have abilities which lie hidden, which even we ourselves do not know about. Ours may not be musical ability. It may have no connection with such arts as painting or sculpture. But, it is certain that each of us, is in some way or other, share in the creative power of God. It is the task of each of us to discover what our abilities are and to utilize them with zeal for the betterment of the world.