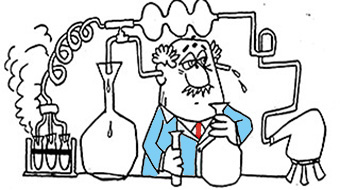 Only optimists make the best use of their talents. They have the courage for difficult projects and the patience to persevere.

Thomas Edison was an optimist. An interesting story is told of a particularly difficult series of experiments Edison had undertaken. He worked on this project for months. His helper, who had kept track of the number of times the experiment had failed, was ready to give up. "We have tried 90 different ways and have failed each time," he said. "Just think of all the time we have wasted."

Thomas Edison did not agree with the statement, and replied, "We haven't wasted any time. We are much smarter now than we were when we started. We know 90 ways that don't work." He continued trying and, after a few more failures, finally succeeded.

The lives of all great persons are filled with stories of failures. Their lives ended in success only because they realized the value of each of their failures. They arose as better persons, more intelligent and more courageous. They suffered from disappointment, just as you and I do. But they did not give into such feelings. Deep within their souls, a basic optimism kept repeating, " I will succeed."

It was this optimism which caused them to keep on trying. It was because they kept on trying that they finally succeeded. If we succeed in life, it will be because we have followed their example.