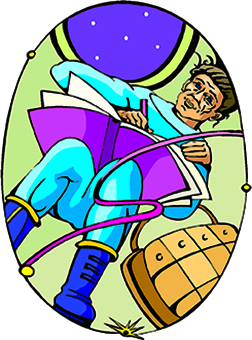 When manned satellites were first put into orbit and each satellite carried only one astronaut, the men in charge worried about the psychological effect of isolation on the astronauts. They feared that these men might give in to excessive depression when they found themselves floating alone in the atmosphere. As it turned out, the pioneer astronauts had no difficulty along this line. In their flights around the earth, they were too busy fulfilling the duties of their mission to be lonely.

When the satellites began to carry two or more men and the flights became longer, a new fear arose. Would two or three men be able to live together for days insuch cramped quarters without becoming angry at one another? Fortunately, this fear proved to be unfounded.

The Gemini 5 and Apollo 12 flights showed the world remarkable examples of how men could work together for many days in a very friendly manner. These flights were difficult not only because they were so long, but also because of many technical problems which arose. Throughout it all, however, as the talk between the ground crew and the satellites proved, the good humor of the astronauts never faltered. All of these men returned to the earth with broad smiles and in the best of spirits.

They are spiritually united by a mutual dedication to the accomplishment of their mission, and they strongly feel their dependence upon the help of each other as they travel alone through the outer reaches of space.

Their common spirit of dedication to their task and their feeling of dependence on each other's help unite the astronauts in orbit, just as they unite men and women in other walks of life. These are two conditions for success and good feeling in all the undertakings of men.